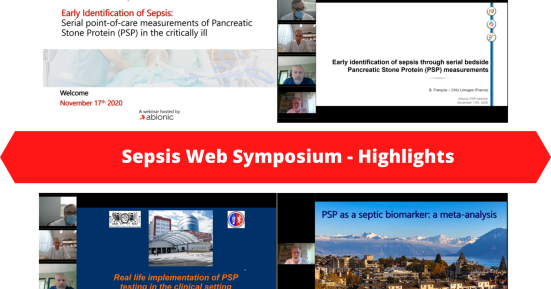 📢📽 Re-watch our online symposium from November 17th 2020 to learn how the biomarker Pancreatic Stone Protein (PSP) enables the early identification of sepsis in the critically ill.

Dr Bruno François from HU Limoges, France, presented results from the recent European multicentric study, which analysed daily PSP measurements in critically ill patients. He stated that ‘’this is probably one of the most interesting findings, to not only consider PSP as a unique biomarker at one specific timepoint, but to look at the evolution and trend of PSP, PCT and CRP.. as you can see the best prediction was given by the PSP... between sepsis and non sepsis populations.’’

Dr Angelo Giacomucci, who’s team have already implemented the PSP test in the Intensive Care Unit at the Azienda Ospedaliera di Perugia in Italy, said ‘the device [is] easy to use and suitable for routine use as much as the blood gas analyzer is.’’ He also concluded by saying that “In the clinical setting, PSP promises to be an early marker of sepsis, but also a predictor of death in patients with sepsis. The PSP time course tends to be correlated with the clinical course and even with the catecholamine infusion rate.”

In Dr Philippes Eggimann’s systematic meta-analysis of individual patients’ data pooled from 5 clinical studies, he mentioned that “in conclusion, this meta-analysis explores the diagnostic accuracy of PSP to detect infection [...] and we conclude that PSP is a promising biomarker.“ Adding that “the combination of PSP with CRP may also add value to reach very interesting predictive values to detect an infection.”

Professor Steven Opal ended the session by reflecting on the fact that “we’ve been trying for a long time to come up with early, rapid diagnostic information to assist us in decision making, and I think we are now getting closer to it.”